The Property Management Division: More than just a job 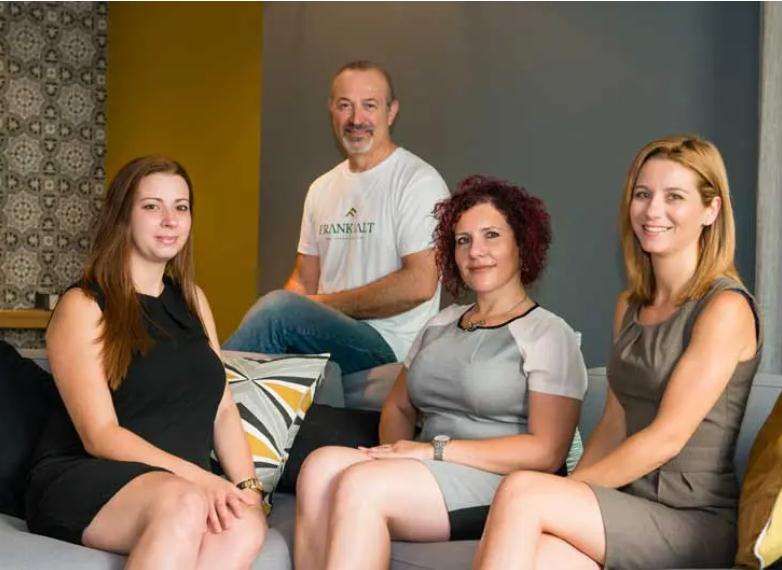 When Bronia Mercieca’s mobile phone went off on Christmas Day, her husband paused with his fork in mid-air. It was bound to be a tenant with a problem – and he was right. An Italian renting an apartment in Valletta was in the middle of cooking the family celebration lunch and had run out of gas.

There was a full cylinder there but he had never seen one before and was scared of trying to change it himself, even after Ms Mercieca sent an online explanation link.
“I didn’t even need to ask him. My husband said we had to go and that is what we did. It only took a few minutes but it saved his family’s Christmas lunch,” she laughed.
Ms Mercieca is the manager of Frank Salt’s Property Management Division, a small team of four people and two handymen.

“We will soon add another handyman as it is better to have our own full timer rather than outsourcing – since the amount of work justifies it,” she said.
And the amount of work certainly justifies it: at the moment the division manages 180 properties across the island, and although the majority are long-lets, there are enough short-lets to ensure that her phone never stops ringing.

The Property Management division started off over a decade ago when the real estate agency sold holiday homes to foreigners and offered to keep an eye on a handful of them while the owners were overseas.“We used to go once a month to check everything, issue a short report. And that was it!” she recalled. “Many of the properties were at Portomaso, so it was very easy for us to pop over from our head office! But when there were issues, it was so much easier for us to deal with them than for the owners to be contacted in their home country.”

Since then, the numbers have grown considerably and the service has matured into a full service property management company (one department in Malta and a similar one in Gozo) – with concierge services thrown in for good measure. In the three and a half years since she took over the division, her hands-on approach means she has personally intervened to fetch keys to let a tenant into their apartment after they locked themselves out in the middle of the night and even picked up a client’s Tallinja card.

“The reward is the thank you – and yes, seeing your name mentioned in positive reviews on Trip Advisor or other social media is very satisfying!” she laughed.
There are fundamental differences between the requirements of long-lets and short-lets, for both the owners and the tenants – which makes property management companies very sought after, particularly when an owner has more than one property.

“Short-lets are very demanding as you have to be at their disposal round the clock. The tenants very often arrive outside office hours! We arrange for the keys to be given to them in a sealed envelope by the taxi-drivers,” she explained.

“Short-lets obviously generate much more money but you also have to take into consideration the higher costs. They mean a lot more wear and tear, besides factoring in laundry, cleaning and utility bills. Majority of people staying for a few days do not look after the property the way they would if they were there for longer! Long-lets tend to settle in and get used to the property. They don’t call us every other day!” she said, explaining – with a sigh of relief – that around 90 per cent of the properties they manage are long-lets.

One advantage of a short-let is that it is prepaid whereas long-let rentals are usually paid monthly or quarterly. Thankfully, it is not so common that tenants are late with payments and even rarer that they fall so far into arrears that they have to be evicted.

Apart from the obvious tasks like touching up the property before a new lease and checking the property at the end so that the deposit can be released, the division also keeps an eye on the utility bills, to ensure that what is being deducted on a monthly basis is enough to keep up. They also volunteer to change the locks at the end of a tenancy, which gives the owners additional peace of mind.

“These are all simple things which are aimed at preventing problems,” she said.
Property management companies have a dual role as they are engaged by the owner but are there to keep tenant happy.
“We often act as an intermediary between the owner and the tenant – which is especially useful when it is something not so pleasant, like a problem in the apartment or a revision of the rental fee,” she said.

Another important role is establishing the rent that an owner should ask, which is where it helps to be part of a real estate agency. Frank Salt Real Estate monitors the market regularly, which helps to ensure that the rent is set at the right level: for example, rentals in St Julians went up by €100 to €150 a month over the last year.
“We and the letting agents enjoy the trust of the owners so we help them to keep a balance. They have to keep their feet on the ground or risk having their apartment and investment empty for a few months.

“On the other hand, some owners find it hard to know how much to charge if their property comes back on to the market after a long time, for example. It is so useful to be able to refer to a Frank Salt branch in that area who would have a very clear idea of the trends there.

“We are also in a very good position to advise owners on how to make the property easier to rent and how to attract higher rental, whether through paint, new furniture or decoration. Preferences have changed and foreign tenants rarely want the traditional Maltese style of furniture but want something much more minimalist and simple.”
The only problem at the moment is that demand is so high, with clients ready and waiting, even before the apartment is available.

“On the list last week we only had five properties available to rent out…” she lamented. Thank heavens there are some new blocks coming on stream at Pender Gardens…”

Bronia Mercieca is Manager of Frank Salt Real Estate Property Management Division and can be contacted on 2379 4551.