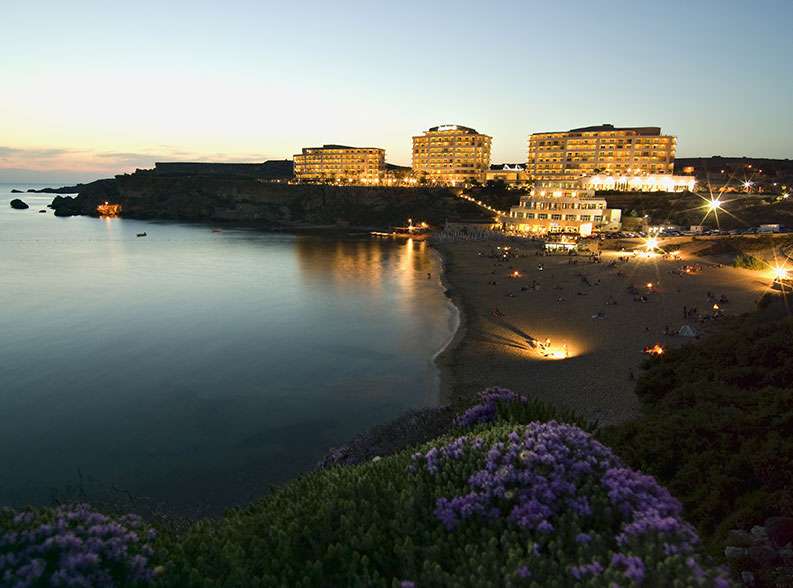 The sunny Mediterranean Island of Malta was home to my mother’s business Mary Ruane Knitwear in the 1980s. My monthly commute for many years was from the UK to her factory in Msida, a harbour town on the north east coast, which gave me an insight into the Maltese way of life and a lasting affection for the Maltese people.

Her three-bedroom apartment in Mosta, situated in the centre of the island, became a second home for the whole family; she bought the property for just £11,000 and today after the addition of two Italian style bathrooms and new modern kitchen is valued at £135,000.

After a gap of 17 years during which I explored other countries I felt it was time to return, to rediscover some of my favourite haunts and see how the island had changed.

The island has retained its old world charm

The potholed roads, ancient cars and iconic old buses that you couldn’t stand up in have been replaced with dual carriageways, top of the range cars and Arriva buses but thankfully the island has still retained its old world charm which is one of the reasons it is still so popular as a filming location; the Da Vinci Code, Game of Thrones, League of Extraordinary Gentlemen and of course Ridley Scott’s Gladiator are just some blockbusters that were made there, as well as to a large community of Brits who either have second homes on the island or retired there.

Even world’s wealthiest impresario Sir Cameron Mackintosh (his mother is Maltese) has a base in Malta; he has renovated a stunning palazzo in Old Valetta and describes the island as: “wonderfully idiosyncratic. It has a very special atmosphere; it is my favourite island in the Mediterranean.”

The republic of Malta actually comprises three islands: Malta, Gozo and Comino. Gozo, the second largest, is more rural and favoured by artists and artisans.

One witness to Malta’s metamorphosis, is Tim Gould who was born there 63 years ago, while his father was based there during his time in the Navy.

I met him and his wife Jacky (pictured left) in the bustling capital of Valletta for a light lunch. Tim, an insurance broker in Lloyds and Jacky, a probation officer from Oxted in Surrey, bought a 700-year-old farmhouse in the quiet village of Siggiewi in 2003.

“Malta is where my heart is”

They had taken three years to find their dream home and now use it two to three times a year. They rent it out for the rest, but the plan is for them to retire there. They paid £56,000, but its value, after some tender loving care has since doubled. “As a child I was sent to school in England and returned to Malta for the holidays, it’s where my heart is,” Tim explained. “I still see Maltese friends and some from the Ex- Pat community that I have known for most of my life.

“Since Malta joined the EU in 2004, many wealthy people have invested in local banks and property; expensive villas have been built and business is booming,” he observed. “These wealthy people expect high standards so Malta has gone on a fast learning curve to improve them”. Of course the other huge lure for Brits is the fact also that English is widely spoken and they drive on the left hand side of the road. There is also no council tax nor inheritance tax and properties priced at all levels.

Shopping in Malta as I remembered was a rather dreary affair, with outlets mainly selling craft items for tourists, but the opening of a large shopping centre on the peninsular Tigne Point has proved a huge draw.

An exclusive slice of island life

Tigne Point is part of a E600 million project by the Midi plc consortium, which has created a car free village on a former military barracks. It directly faces the dramatic capital, the walled city of Valletta, a UNESCO World Heritage Site. Residents in this luxurious development can own a share of an exclusive slice of island life with the Mediterranean wrapping around the 30-acre plot. They have access to a magnificent swimming pool, underground parking and top notch restaurants and all within 20 minutes of the new Luqa International airport.

Tigne Point is the largest regeneration complex in Malta and is launching two more phases to the development which includes 103 seafront properties.

“The infrastructure in Malta has steadily improved since joining the EU,” says James Vassallo, Tigne Point’s senior marketing manager. “Jobs in financial services, IT and manufacturing are attracting well-heeled young professionals to the island as well as overseas investors looking for a good return on their money, especially retirees who now buy properties rather than rent them.”

The imminent launch of the first phase of 38 seafront apartments will comprise two-beds measuring from 134 sq metres and three duplex penthouses measuring 200 sq metres including terraces. “The best thing about them is that they are directly on the water with no road or traffic,” adds James. “They are also in a 30-acre car free zone, so all you will hear is the sound of the fishing boats.” Prices will start from around E500,000 for a two bed rising to E1.4 million for the best three beds.

“The idea was to breathe new life in the area and it has been better than we could have imagined,” added James. “Malta has obviously been affected by the Eurocrisis but it has held its own. We haven’t needed a bail out and growth is projected.

“Resales prices have not sunk lower than the original price but profits are not as high as before. Demand in super prime properties are high but it is rare for one to come on the market. There are buyers waiting but no-one wants to sell.”

As I motored around the island, I was spellbound by the beauty of the historical architecture, the silhouettes of towns on the horizons and the dramatic coastal views. I sampled the Maltese cuisine and remembered how much I liked it; particularly rabbit cooked in garlic and the traditional Maltese cream cakes and pastries.

For me this tiny island on the southernmost tip of the European community has undergone huge changes during my absent years. Boutique hotels have replaced tired self-catering blocks, quality has replaced quantity in new builds and order has replaced chaos on the roads. However Malta’s unique identity has remained intact; goats are still herded through the villages, lace-makers still practice their craft in the villages and as I left I had a real desire to return as soon as possible to the bolthole my mother has kept for friends and family to enjoy.

The Maltese High Commission in London runs regular seminars about moving to and buying in Malta. For more information visit. www.movetomalta.co.uk