Property for Sale in Gozo

Gozo, known as Għawdex to the Maltese, is an island forming part of the Maltese archipelago. The island is part of Malta and the second-largest island in the archipelago. Compared to its southeastern neighbour, Gozo is more rural and known for its scenic surrounds and slow pace of life. The island has a population of around 37,500 and its inhabitants are known as Gozitans.

Gozo is a treasure trove of historic locations such as the Ġgantija temples, which, along with the other Megalithic Temples of Malta, are among the world’s oldest free-standing structures.

Gozo is less developed and was known for the Azure Window, a natural limestone arch that was a remarkable geological feature, until its collapse on Wednesday 8th March 2017. Several television series and films were shot in this location. Adjacent to this site one will find the mesmerising Inland Sea and close by the Wied il-Mielaħ Window. Gozo has quite a few beaches as well as seaside resorts that are popular with both locals and tourists. The most popular are Marsalforn and Xlendi. Gozo is considered one of the top diving destinations in the Mediterranean and an international centre for water sports.

During the Neolithic Period the Ġgantija temples were built and not only are they among the world’s oldest free-standing structures, but also one of the world’s oldest religious structures. The temple’s name is Maltese means “belonging to the giants” because of Maltese legends purporting this. Another important archaeological site which dates back to the Neolithic period, is the Xagħra Stone Circle. Folklore and some ancient Greek historians such as Euhemerus and Callimachus maintain that Gozo was the island that Homer described as Ogygia, home of the nymph Calypso. Therefore Gozo is often referred to as “Calypso’s Island”.

Evidence of people living on Gozo dates back to 5000 BC, when farmers from nearby Sicily crossed the sea to the island. Remains of ceramic artefacts suggested that the first colonists were specifically from the area of Agrigento; however, it is currently unknown exactly where in Sicily the farmers came from. They are thought to have first lived in caves on the outskirts of what is now known as San Lawrenz. Gozo was occupied by the Carthaginians, who built a temple dedicated to Astarte on the island and the island minted its own bronze coins in the 1st century BC. In July 1551 the Ottomans invaded and ravaged Gozo and enslaved most of its inhabitants, taking them to what is today Libya. The island found itself governed by Malta throughout most of history, with the exception of a period of autonomy granted after the uprising against the French forces following Napoleon’s conquest of Malta. In 1987 the Ministry of Gozo was established, giving the island more autonomy once again.

A notable building on Gozo is the Rotunda of Xewkija which can accommodate 3 000 people. It’s dome is larger than that of St Paul’s Cathedral in London and it is a popular tourist destination its silhouette can be seen from nearly everywhere on the island. The most famous church on the island is the sanctuary of Ta’ Pinu, near the village of Għarb, in the west of Gozo and many thousands make a pilgrimage here.

It is easy to reach the island by ferry daily, with crossings about every 45 minutes between the port of Mġarr on Gozo and Ċirkewwa on Malta. The ferry company is called “The Gozo Channel Line” and owns 4 ferries, all which shuttle nearly 24 hours a day between the two ports . Discussions are under way for the construction of a tunnel, linking Malta to Gozo. Expressions of interest have been issued for a fast catamaran service between Gozo and Valletta and there is an existing service between Gozo and Sicily. 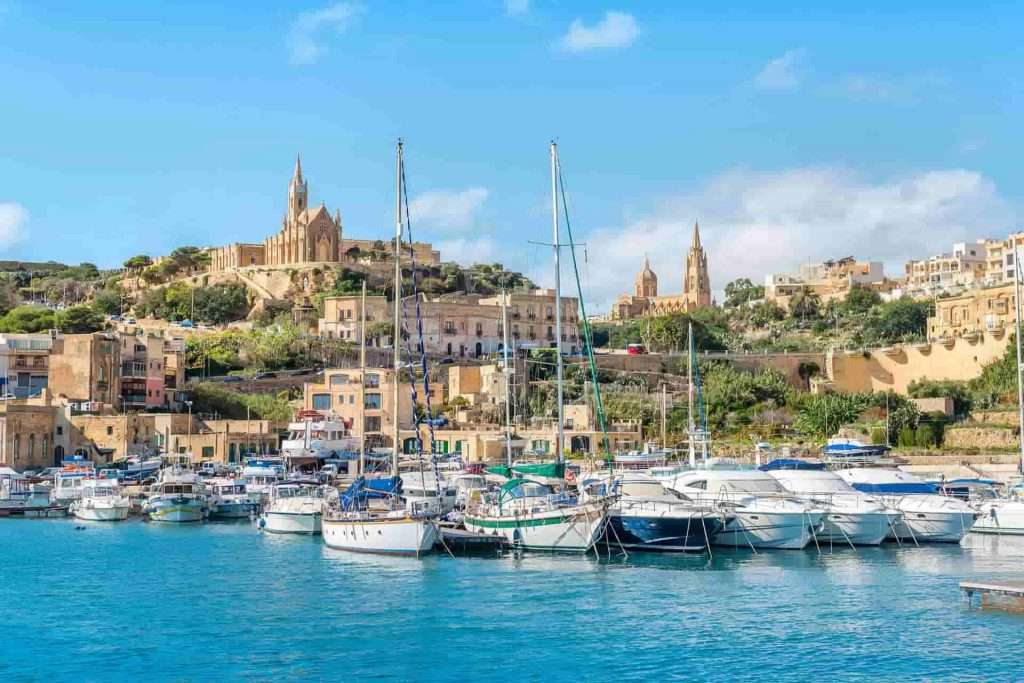